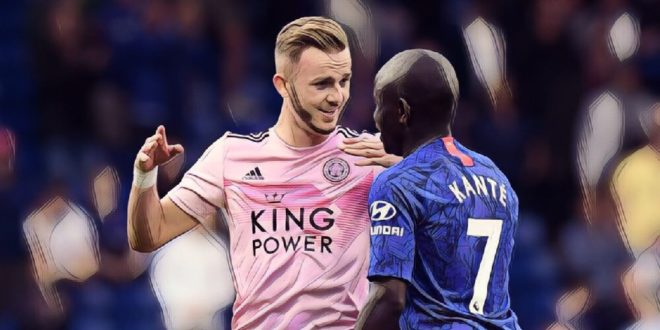 Brendan Rodgers has lavished praise upon the young shoulders of James Maddison, predictably using his favourite word ‘outstanding,’ to describe the talented playmaker.

The young English midfielder was one of the star performers for Leicester last weekend as they came from behind to earn a draw against Frank Lampard’s side, with Maddison delivering the corner which was headed in by Wilfred Ndidi.

His performance sparked praise from pundits and fans alike and speaking ahead of this weekend’s game against newly-promoted Sheffield United, Leicester boss and full time guff machine Rodgers directed more plaudits in the direction of the 22-year-old, who has been tipped to make his England debut in the upcoming games against Bulgaria and Kosovo.

“I haven’t spoken to Gareth [Southgate]. Since I’ve come in, I’ve been so impressed by James,” Rodgers said at his pre-match press conference.

“He’s got a great football brain, technically he’s a high level, everyone sees chances he creates, how he finds space and creates opportunities for others, and he’s tactically improving all the time.

“He loves football, thinks about the game, loves training. You saw his performance last week, outstanding with and without the ball. He’s a really good guy, has lots of maturity, plays with great spirit and he’s a joy to work with.”

Manchester United fans were among those who took to social media to praise Maddison’s performance last weekend after the Red Devils had been linked with a £60 million move for the playmaker in the summer, while Jamie Carragher has said Liverpool should be ‘looking at’ the former Norwich man.

The virtue of investing in youth: How Premier League clubs can make a killing in the transfer market

See also – Six of the most exciting teenagers in world football

‘Bring him home’: Some Newcastle fans erupt after finding out who wants St James’...