Home News Enough is enough: West Ham must get rid of toxic situation this... 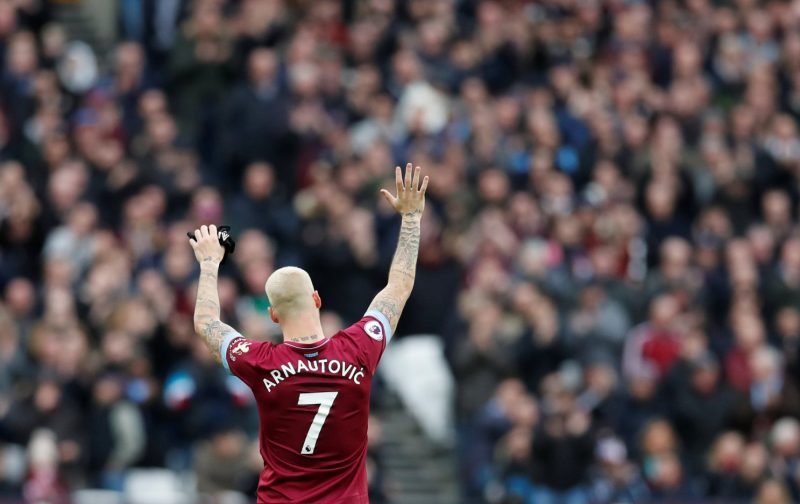 It was only a matter of time before West Ham United faced a problem that was always going to rear its ugly head once again.

There is no smoke without fire, so it is hardly a surprise that Marko Arnautovic’s name is in the news once again regarding a desire to leave us this summer; he allegedly handed in a transfer request, although club sources told Sky Sports that was not the case.

He pushed for an exit in January when clubs in China came calling for him, however, we stood firm and managed to convince him to sign a new contract (BBC). But, let us be honest for a moment, that was only ever going to be a plaster on an axe wound and he has only gone on to prove it.

Yep, just six months later that plaster has been ripped off and now it seems the situation has scarred. The only way we can surely fix this is by cutting ties with Arnautovic and cashing in on the Austrian this summer.

According to a report by Sky Sports, we rejected an offer of £19.7million from an unnamed Chinese outfit as we felt it was ‘insulting’. To make things worse, Football Fancast revealed sources close to them stated that the 30-year-old wanted the club to accept the bid.

And, his brother, who also acts as his agent, Danijel has criticised us with how we have allegedly handled the forward.

“He’s not a cow or a horse which you bring to market,” he said. “He’s a highly talented footballer who is simply being used by West Ham. He’s just a number to them.

“West Ham were trying to get rid of Marco right up until the last minute of the January transfer window and they are still trying to sell him right now. To them he’s just a commodity.

“West Ham are still speaking to the Chinese club. He is still for sale and it’s simply a case of how much money West Ham can get for him.”

Good, if we can get around £25m for him, we would be happy as we should have sufficient funds to bring in two solid strikers to replace him – we have been chasing Maxi Gomez (Marca (via Sport Witness)) for what seems like a lifetime (although that deal looks unlikely to take place) and Salomon Rondon (Northern Echo) has been touted as a possibility as well.

Enough is enough, we need to get rid of the Arnautovic brothers this summer, otherwise, this toxic situation will just continue to happen as long as he is at the London Stadium.

Enough is enough: West Ham must get rid of toxic situation this summer –...

Pundit slams Sturridge: ‘I wouldn’t want him in my dressing room’ – Football365.com